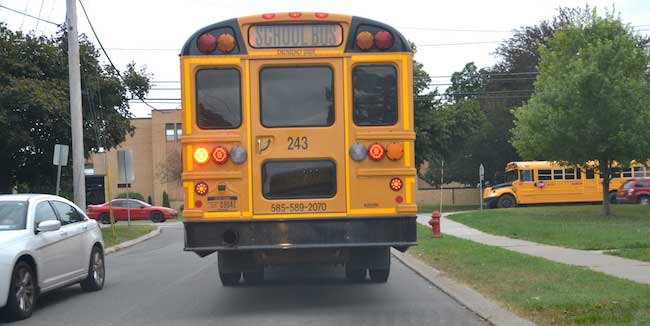 Photo by Tom Rivers: A school bus is shown on McKinstry Street this morning at about 8:50 a.m. It’s a busy intersection at McKinstry and Route 31 in the morning school rush.

ALBION – The Village of Albion is taking applications for the crossing guard position in front of the middle school.

The village will be paying $13 an hour for the part-time position, which is two hours a day. Crossing guards are needed for about 180 days a year. The village is estimating it will cost about $5,000 in pay.

The village will also provide a reflective vest and a flash light. Albion would like to hire more than one so it has flexibility in case a crossing guard calls in sick or is unavailable.

The village will post the job through Civil Service in Orleans County.

Albion Mayor Dean London notified the school district in early September that there wouldn’t be a crossing guard anymore. That sparked an uproar in the community. The school district offered to help cover the cost. That is being negotiated as to how much the school will contribute to the expense, London said during Wednesday’s board meeting.

Police Chief Roland Nenni on Wednesday presented the board with a packet about the position, how it will be filled through a Civil Service posting. He said there will be background checks on people considered for the job.

He recommended the village allow hiring up to five crossing guards. Some of them might never be utilized in the role, but having them trained and ready would give the village more flexibility. He said it’s possible some crossing guards would just work in the morning and someone else in the afternoon. Or some might just work in warmer weather months, while others serve during the winter.

The Police Department will provide 8 hours of initial training, and then about 2 hours of refresher training in following years. The crossing guards will be appointed each year, likely in August and then serve until June 30, the end of the school year.

The position was expected to be posted today with applications available later this afternoon at the Village Office at 35-37 East Bank St.