Albion presents citation for Steven Coville, who was dedicated to Sandstone Park 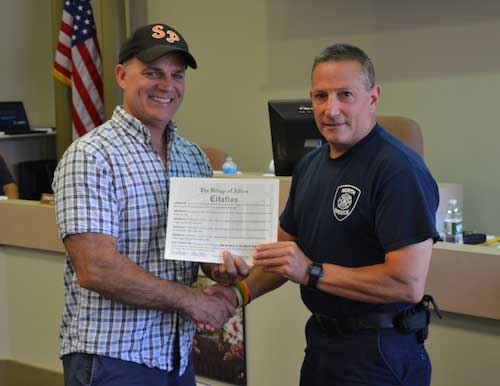 Photo by Tom Rivers: Marcus Coville, left, accepts a citation from Village Trustee Peter Sidari on Wednesday in honor of Coville’s father, the late Steven Coville, who volunteered for 40 years at Sandstone Park, where Sidari played Little League baseball. Last month, the field was named in honor of Coville.

ALBION – The Albion Village Board presented a ctation on Wednesday in honor of the late Steven Coville Sr., who volunteered for 40 years at Sandstone Park as a coach and groundskeeper.

The park is not owned by the village. A non-profit corporation oversees the baseball field on East State Street. Coville coached the team for 22 years and then served as groundskeeper and ran the concession stand.

Coville passed away at age 76 on Jan. 17. He loved helping the Little League team on East State Street.

The park’s leaders on June 22 named the field in honor of Steven Coville. A new sign with his name and picture was unveiled at the backstop for the field.

Sandstone Park is one of the original teams from when the Albion Midget League started in 1956.

Coville led the team from 1979 to 2001. He would also mow the expansive lawn and work on the field at Sandstone. He ran the concessions to raise money for the team to buy baseballs and other equipment.

“He impacted hundreds of youths,” Sidari said on Wednesday in presenting the citation to Coville’s son.