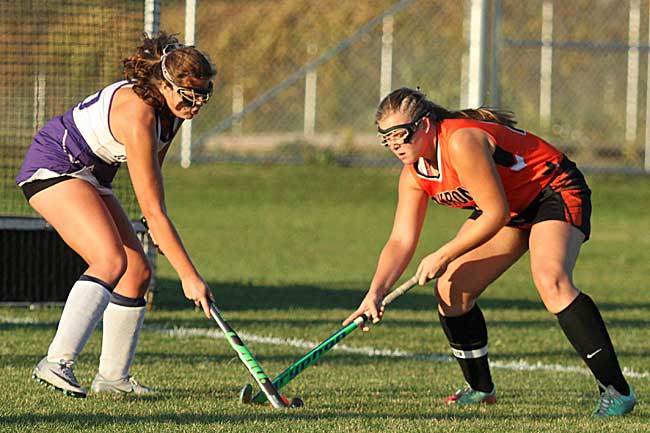 Photo by Cheryl Wertman – Roy-Hart’s Jayden Towsend battles for control of the ball with Akron’s Abby Stone during the Lady Rams narrow loss to the visiting Lady Tigers this afternoon.

Defending champion Akron edged past host Roy-Hart 1-0 this afternoon to earn a share of the Niagara-Orleans League field hockey title with Barker which romped past visiting Kenmore 5-0.

Akron and Barker finish the N-O campaign sharing the crown at 11-1.

Kayla Wdowka scored the game’s lone goal for Akron with just seven minutes remaining in the second half.

Roy-Hart goalie Jamie Bower had a huge game including stopping a penalty stroke early in the second half to keep the contest deadlocked at 0-0.

Katrina Clare and Natalie Menz each scored a pair of goals and Jillian Moeller added one for Barker. Menz and Moeller also each had an assist for the Lady Raiders which led 4-0 at the half.

Cara Fox and Paige Sandolfini shared in earning the shutout in goal.

Kenmore finishers the league season at 1-11.

In the day’s other game, Medina edged past host Wilson 2-1 on goals by Grace Flores and Alexis Maines.

Medina and Wilson both finish the N-O season at 5-7.