After study of local law enforcement, no push to end village police 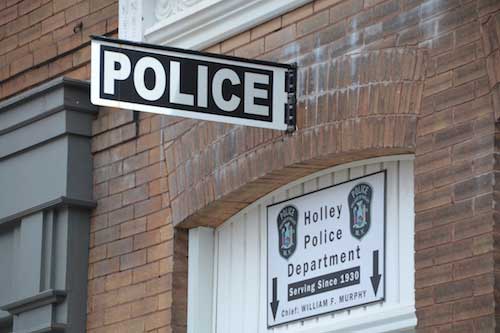 Photo by Tom Rivers: The sign for the police station for the Holley Police Department is shown on Thomas Street. Roland Nenni is currently Holley’s police chief.

The group met on April 5 to discuss several possibilities that could reduce overall costs and perhaps result in better service.

Law enforcement, however, won’t be part of the discussion, right now. Village officials declined to even mention the issue at the April 6 meeting.

The village police departments and Orleans County Sheriff’s Department will continue to do some specialized training together, but there is no push to dissolve a village department and have the county Sheriff’s Office step up its patrols in a village.

“The leadership at the various villages have expressed reservations for a number of reasons,” said Chuck Nesbitt, the county’s chief administrative officer. “It has to come from the villages. They’re the ones who have to vote or not vote.”

The local entities worked with a consultant, CGR in Rochester, on a law enforcement efficiency study. CGR’s work showed there would be significant tax savings for the villages of Albion and Medina – about $6 to $8 per $1,000 of assessed property – if they dissolved their departments and then the county took over. (Doing so would also raise the county tax rate by an estimated $2 per $1,000 if all of the village police departments dissolved and deputies were hired to work in the villages.)

Holley, which also has a police department, wouldn’t see as much savings because it’s department is staffed with many part-timers. Having full-time deputies patrol the village ultimately wouldn’t reduce costs in Holley, according to the study. (Lyndonville only has one part-time officer.)

All of the villages joined the county in voting to do the study. However, the villages haven’t embraced the findings.

Medina Mayor Mike Sidari has told the law enforcement committee he wants to keep the village police. He said there hasn’t been a push by village residents to end the local department.

Albion had a village election last month and three candidates who made keeping the village police a focus of their campaign were all elected, although it was close.

Eileen Banker received 250 out of 614 votes to win election in a three-way race that included Joyce Riley, 211 votes, and Kevin Doherty, 153. Riley and Doherty said they were open to looking at all villages expenses and making tough decisions. That didn’t mean they favored dissolving the police department, but they said they were willing to give the department rigorous scrutiny. Although Banker won, she didn’t receive an overwhelming mandate. She received 41 percent of the vote.

The Republican duo of Gary Katsanis, 306 votes, and Stan Farone, 300, eked out a win over Democratic Party candidates, Jason Dragon, 274 votes, and Sandra Walter, 264. Dragon and Walter said they didn’t think the police department, which costs the village about $1.2 million annually, was affordable for the village. Having a county-wide force, doing the primary patrols in the villages, would spread out the cost for all taxpayers. Dragon said village residents pay for law enforcement in both their county and village taxes.

A state grant paid $36,000 towards the study while the county paid CGR $38,000 for its work. The county isn’t going to press the issue, Nesbitt said.

If village residents want to pursue the issue, they could always petition to have a police department dissolved. Ultimately, if a village wanted to consider a dissolution of the village police, residents would decide the fate in a public referendum.