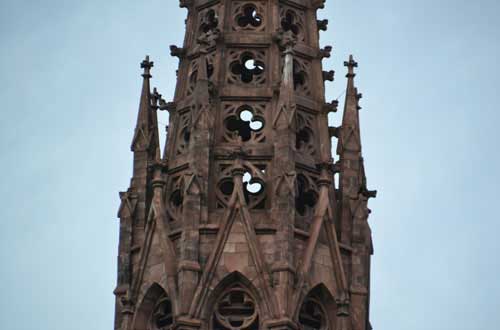 Photo by Tom Rivers: The top of St. Louis Catholic Church in Buffalo is an open work lattice spire that reaches 245 feet high. It is the tallest open-work spire ever built completely of stone in the United States. This church was inducted into the 2014 Class of the Medina Sandstone Hall of Fame.

MEDINA – A new class of buildings will be inducted into the Medina Sandstone Hall of Fame on Oct. 17 during a 2 p.m. ceremony at Medina City Hall.

The Medina Sandstone Society will induct four members into the Hall of Fame, which was created in 2013. The Sandstone Society has inducted churches, public buildings, private buildings and other ornamental buildings/structures, such as the Civil War Memorial at Mount Albion Cemetery.

There are currently 27 structures into the exclusive club. There are plaques for the inductees inside Medina City Hall at the main meeting room.

A Hall of Fame Committee – David Miller, Jim Hancock and Don Colquhoun – researches all nominations and they make a site visit.

Representatives of the four new inductees are expected for the ceremony on Oct. 17, Colquhoun said.