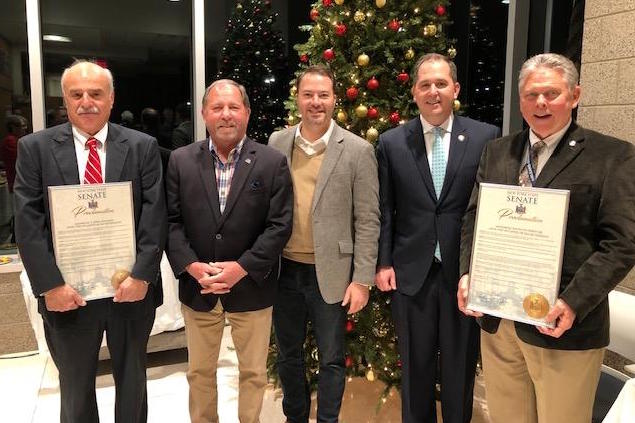 ALBION – Two Orleans County legislators who joined the Legislature together eight years ago attended their final meeting as legislators on Monday.

Ken DeRoller of Kendall and John DeFilipps of Clarendon were both praised for their high-energy in pushing through many projects.

“These two legislators committed themselves full-time to the position,” said Lynne Johnson, County Legislature chairwoman. “You have served with dedication and commitment.”

The two were presented with plaques from the county for their service on the Legislature. State Sen. Robert Ortt also presented both with framed proclamations from the State Senate.

DeRoller and DeFilipps both opted to retire rather than seek re-election. DeRoller’s spot in January will be filled by John Fitzak of Carlton and Ed Morgan will take DeFilipps’ place on the seven-member board.

DeFilipps said he was grateful for the many friendships he made around the county in his role as legislator.

“I met a lot of good people, been to places I probably wouldn’t have gone,” he said during Monday’s Legislature meeting.

DeRoller sees progress on many fronts for the county.

He cited the $17 million transformation of the Holley High School, which is now 41 apartments and the Holley village officials. That project is a major improvement at one of the gateways into Orleans County along Route 31.

New homes are being built as part of the Cottages at Troutburg, a former Salvation Army camp in Kendall.

DeRoller said those plans have identified many projects and initiatives to better utilize that waterfront property for residential, recreational and business development.

“This will give us some opportunities for the future,” DeRoller said about the plans.

He also noted major projects to better withstand high Lake Ontario water levels, projects identified by local and state leaders for Yates, Carlton and Kendall. The shoreline is now better protected to fight flooding, DeRoller said, and the Oak Orchard and Johnson Creek harbors have been dredged to allow better passage for boaters.

He also thanked the team of county officials for moving forward with broadband expansion that will close the internet gaps in Orleans, a project that has been about a decade in the works.

He also praised a digital literacy initiative led by the Orleans County United Way over the next five years to equip residents to use technology. And he cited the Cooperative Extension for its push to create a robotics garage at Fairgrounds, teaching students to use science, technology, engineering and mathematics (STEM).

“It’s been a pleasurable trip,” DeRoller said. “The journey has been challenging and rewarding.”

He offered a “special thanks” to all of the county employees, legislative clerks and the staff at the Orleans Economic Development Agency. DeRoller and DeFilipps both have served on the agency’s board of directors.

“Together we achieve more,” DeRoller said. “Thanks for listening. It’s been a pleasure.”